skip to main | skip to sidebar

The website I have originally looked at and analysed in class was www.somazone.com.au, however I was going through the Mouchette website and I found it more interesting than the former one, so I will do my critique on that.
Regarding the somazone site, however, I do want to point out some elements that I found interesting and useful for my site. 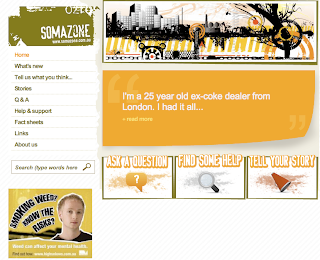 As you can see from the image of the site, there is an orange box with an introductory quote about someone’s story… and everytime you go back to home this story changes. I thought it is a very clever way of engaging the audience, by providing the user with an introduction of someone’s story and cutting it with the ellipsis mark just right where it gets more interesting. It just leaves the user in suspense and wanting to know more about the story, thus engaging him/her into navigating the site. Since the stories told are very personal, it also creates this sort of “intimate” and “confidential” relationship between the person “speaking” in the site and the user. I would like to use some similar method to attract my audience’s attention and make them explore my site.
As I have been working on the concept for my site, I have come up with the idea of creating around five completely different characters, and here is where the idea taken from somazone comes into play. On my main page I would like to have some similar “hook” so as to make the audience explore each of my characters.
Now going back to the assignment, here comes my critique on www.mouchette.org.
a) This site definitely falls into the category of art rather than design. Although both concepts are very related, this site is not a “commercial” site, in fact is more of an artistic project, almost like an experiment that the anonymous author is doing with the audience as he/she engages them into the life of Mouchette. There is really no “commercial” or “persuading” purpose for which this site was created, rather it is only to involve the audience into Mouchette’s life and experience. Also it is important to notice that this website is based on Robert Bresson’s film, Mouchette; so it’s background is coming from another art form, film. Moreover, the way the site is visually constructed is very artistically, but then again this could fall into design as well, due to its very creative nature. But, in conclusion it is art based website.
b) This site relates to other art/design forms on the web, first of all for its interactive nature. Every day more and more sites, even commercial sites are trying to detach themselves from falling into the conventional layouts for their sites (the typical tabled structure websites). In fact, designers are looking for new ways of presenting information in more interactive and dynamic ways, not only to catch the attention of the users but also to engage the user with a product or a company. To make them directly interact with the “company/product” . Therefore, as this site, with its organic and random structure engages the user to navigate and explore the site, it can be said that it relates to other art/design forms on the web because of its interactive nature. In fact, “Mouchette” herself sort of guides you through her site. She directly speaks to the audience, and invites them to know more about her, she even asks for feedback from the users. For instance: in the section where it says she is thirteen she even asks you how for your name and email.
c) In terms of how I can relate this project to my own, well its easy. Since my goal in my project is to create five different characters with very different personalities or identities, I definitely need to find ways to engage the user into wanting to know each character and explore them. I got a few ideas as to how to do it with both Somazone and Mouchette’s websites. First of all, in the opening window of my site, I do want to have a board where a bit of each character story is told, sort of what they do in the Somazone website. This will be constantly alternating among the characters. Secondly, from Mouchette I like the idea that she speaks directly to the user, and how she tries to interact with the user by asking them questions as well, so maybe for some of my characters I will do the same. I also like how she creates a more personal relationship with the user by adding her voice: well, her yawning and her “singing”. Lastly, I like how she sort of tells the user about what she likes in very strange ways, rather than by saying it. Here is an example: 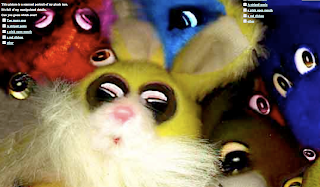